John wrote the following two essays to nominate his future wife, Cynthia, for a caregiver award, which was won in 2008. It reveals a lot about what he was going through and how he dealt with his diagnosis, treatments, and life in general. 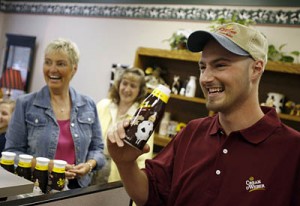 John Rust, who contracted bone cancer and underwent six months of chemo, enjoys one of the few things he could tolerate at the time, Cream O’Weber dark chocolate milk. Recuperating at home in Virginia, Just made a special trip to the company in Salt Lake to thank them for the cases of milk they sent him for free. Photo by Francisco Kjolseth/The Salt Lake Tribune 8/10/2006